You are being accused of committing or attempting to commit some type of violent crime punishable under the UCMJ. The investigation has named you as the prime suspect. Military law enforcement and your command appear to have already pronounced you guilty. You are scared and nobody seems to be on your side. Maybe not even the free lawyer assigned to represent you.

There is talk of severe punishment, including a dishonorable discharge and prison time if you are found guilty. Your military lawyer might even be trying to convince you to cop a plea and take a deal even as you declare your innocence. You may feel as if your military career and even your life are over, or at least catastrophically impacted.

The government and its military prosecutors are coming after you with everything they have and will do everything in their power to convict you and see you serving a prison sentence.

Even if you are actually innocent, it doesn’t matter. The government already thinks you are guilty, otherwise, it wouldn’t be prosecuting you. The government’s evidence may be extremely weak, but it doesn’t matter. Their military prosecutors are hand-picked because of their skill—they think they can win and plan on winning. A good prosecutor can make up for weaknesses in the evidence, especially if your defense attorney is not as good.

Our court martial lawyers have a long history of defending military service members against violent crime charges. A small sample of the types of cases we have aggressively defended against include attempted premeditated murder, murder for hire allegations, vehicular manslaughter charges, and assault and battery charges. We even have death penalty case experience.

Some service members just want to roll over and plead guilty. If that’s not you, if you want to fight and give yourself a chance of being found not guilty, our team of military defense lawyers is ready to fight for you.

We Defend Military Members against
All Violent Crimes 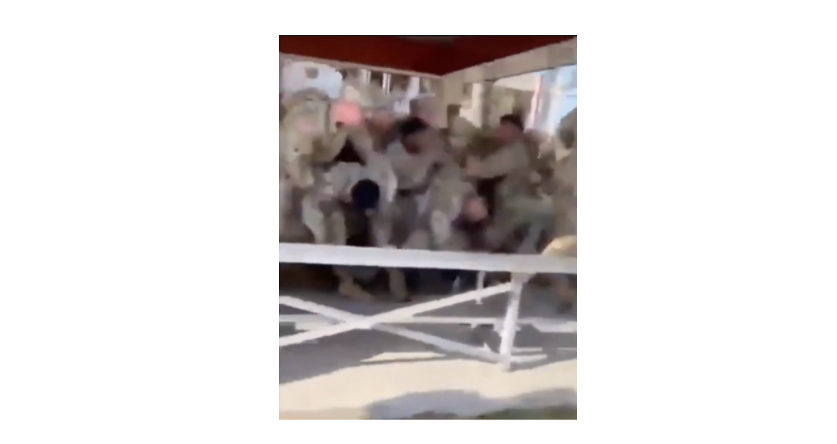 A conviction for a violent crime in the military is no small thing. In fact, the stakes could not be much higher because the consequences are so horrific.

If you are serious about getting the best possible outcome in your case, call our office today and speak to our experienced court-martial attorneys who know how to defend against UCMJ violent crimes charges.

Self Defense May Apply to Your Case, Even if it’s Not Obvious

Typical violent crime offenses charged by the government fall under Articles 118, 119, 122, and 128 of the Uniform Code of Military Justice.

For most of the offenses covered under these articles, including murder, manslaughter, and assault, self-defense can be a perfect defense and may apply to your case without you knowing it. Self-defense has proven to be one of the most successful defenses to use, but also potentially the riskiest to use because the defense is essentially admitting that you committed the act or acts that amount to the crime.

For example, did you know that a person can legally display a deadly weapon to deter violence from being used against you? Did you know that even if you were the initial aggressor in a fight you can become entitled to defend yourself under certain circumstances?

You owe it to yourself to find out whether self-defense could be a winning strategy in your case. Call today to speak to a defense attorney experienced in the matter.

What If I Confessed? – Is It Over?

No. It is not over. There are defense strategies that can be used to overcome a confession.

Military law enforcement interrogations are often viewed and criticized as being extremely coercive. The problem is that military juries often take these so-called confessions at face value. NCIS, CID, OSI, CGIS—all of their agents can lie to you in the hopes of getting you to confess. They may have told you that they have evidence they don’t have. They may have told you that witnesses said things that they didn’t say. They may have even told you self-defense doesn’t apply when it does. These are just a few of the underhanded tactics that military law enforcement agents can use to coerce a bogus and legally defective confession.

If your confession was coerced by law enforcement, with the help of an experienced court-martial defense lawyer, it can be suppressed by the military judge. Without the confession as evidence, the government’s case can become a total loser.

Unfortunately, if you have been talking to a free military attorney supplied by the military, they might not want to fight for suppression. Instead, they may be pushing for you to quickly plead guilty so you can get a so-called “good deal.” In our experience, quickly pleading guilty is often the biggest mistake a military accused can make.

Don’t get it twisted though, confession cases are not easy. It will be a fight. But service members don’t come to us for easy cases. They come to us because they have a supposed “unwinnable case,” and so much to lose but refuse to be beaten into submission.

Our team has been fighting for the best interests of service members for years. So if you really want to fight the charges you are facing, contact our office today and find out how we would investigate, prepare, and defend your case.